Accounting for the UK Fiscal Hole 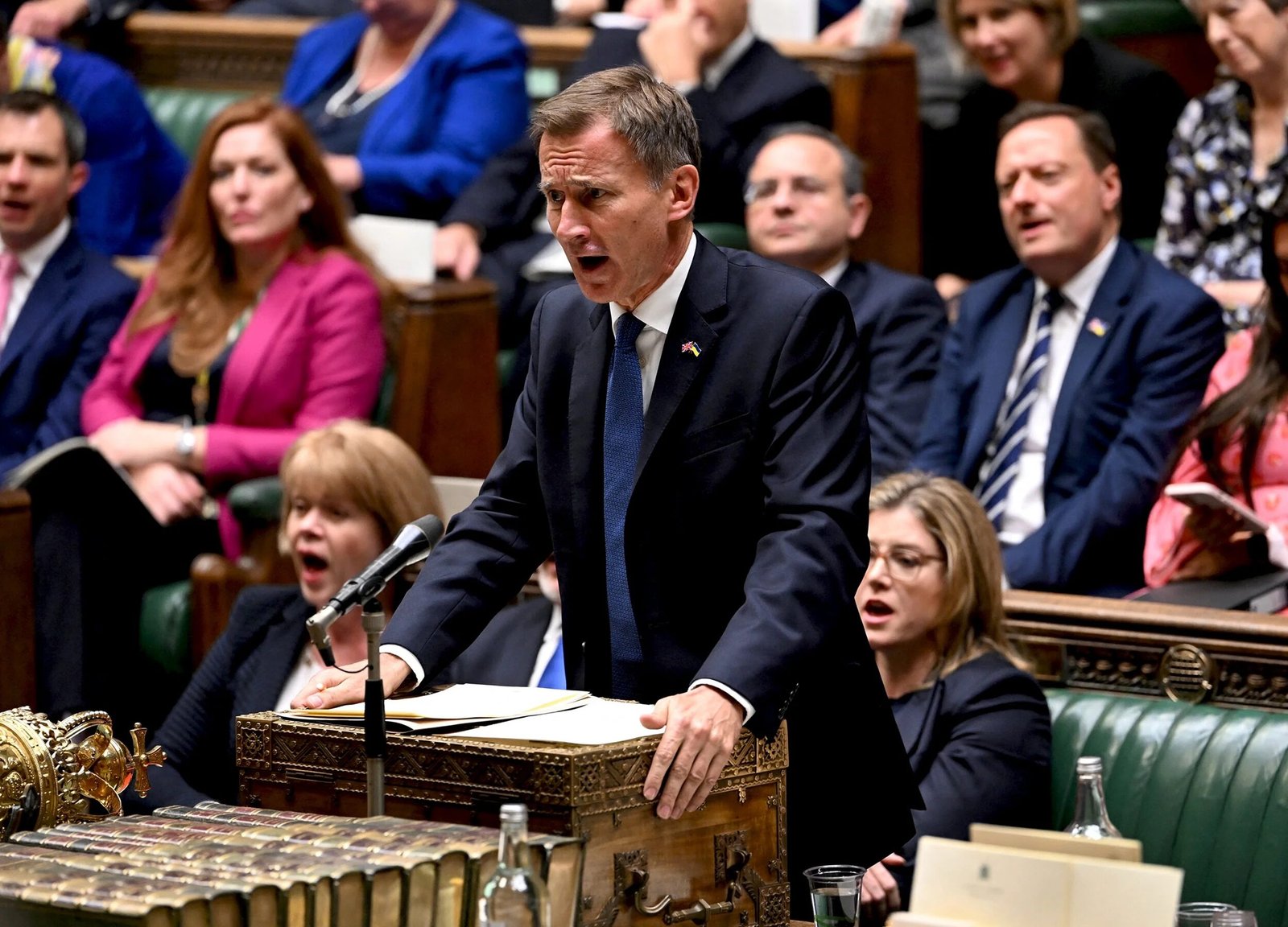 Last November’s Autumn Statement proposed a programme of “fiscal consolidation” – financed through tax rises and spending cuts – of £55 billion by 2027-28. The government’s rationale? Filling a “fiscal black hole” of approximately that size: a legacy of “borrowing hundreds of billions of pounds through Covid-19 and implementing massive energy bills support”, according to one Treasury official. Yet a fiscal hole, while a powerful metaphor, is an opaque and ill-defined term. By unpacking how the £55 billion figure was derived, we can then decide for ourselves if such a programme is indeed an economic necessity.

What is the fiscal hole?

Fundamentally, the fiscal hole is the gap between projected public finances and their target. In the UK, this target depends on the government’s existing fiscal rules, which in turn depend on forecasts from the Office for Budget Responsibility (OBR), an independent monitor. The OBR’s estimates are made public every March and November, in conjunction with the Chancellor of the Exchequer’s Spring and Autumn Statements. One crucial forecast is public sector net debt (excluding the Bank of England) as a share of GDP, which Chancellor Jeremy Hunt has committed to reducing by the fifth year of the latest OBR forecast: 2027-28. A public debt-to-GDP ratio is used as a gauge of how indebted a government is, scaled by the country’s aggregate output.

Just last March, the OBR predicted a decline in this measure (Figure 1, in green) from 2023-24. Then-Chancellor Rishi Sunak had gone as far as to announce that the UK “is meeting all [its] fiscal rules…with a margin of safety”. What has changed? 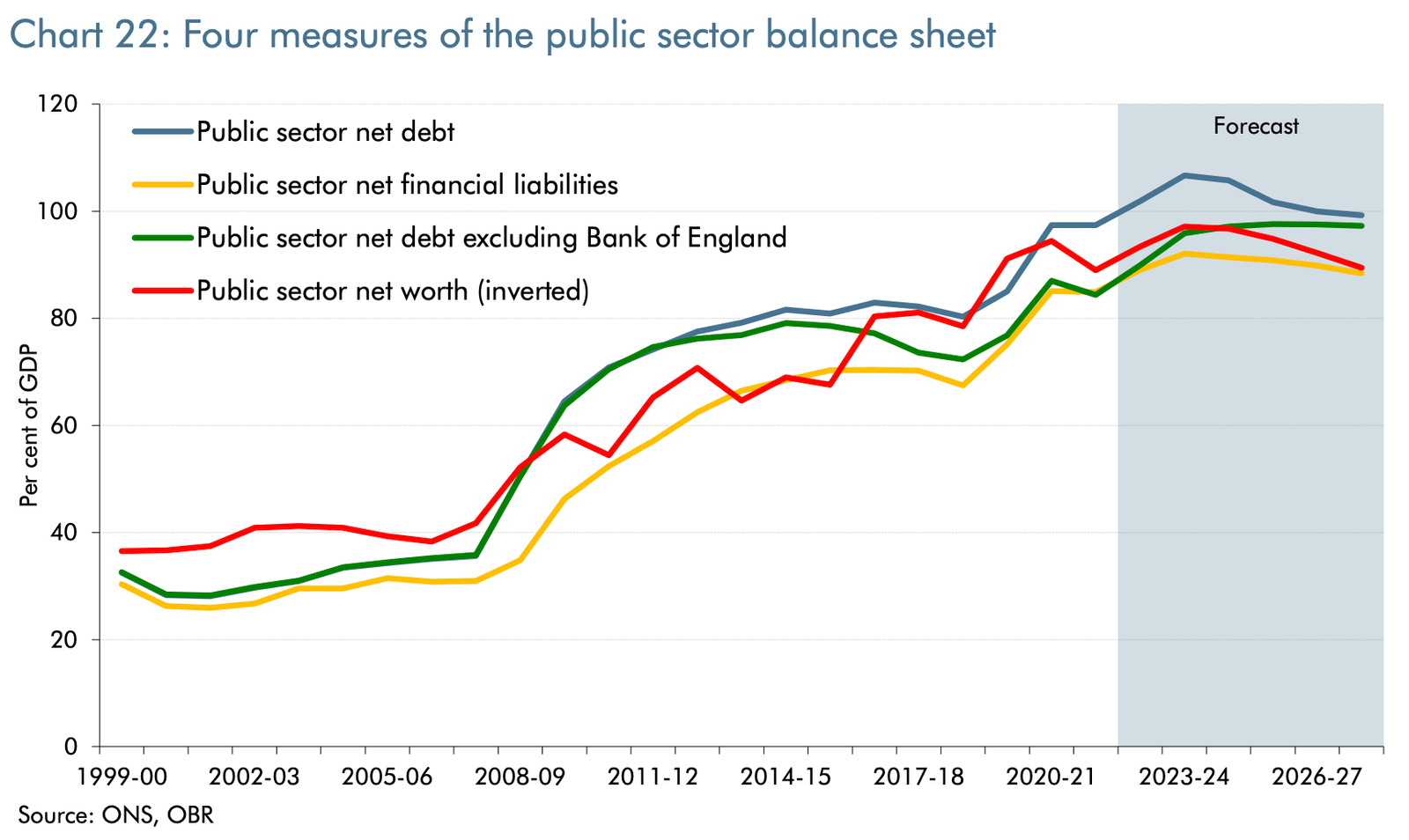 Fiscal prudence is undeniably important for managing the debt burden imposed on future generations. It also calms financial markets and so keeping new public-sector borrowings affordably priced, as we have learned from the fated Truss-Kwarteng policy proposals. But whether fiscal prudence is appropriate depends on its timing and how it is measured.

Consider timing first. With inflation at its highest since CPI figures were first released in 1997, a historically overstretched National Health Service, and mass strikes by public-sector employees, another round of austerity could further inflame these issues. Jagjit Chadha, director of the National Institute of Economic and Social Research, has pointed out that reducing government spending, itself a component of GDP, could further depress growth, lowering tax receipts and raising welfare spending. Number 10 has acknowledged the timing issue by designing fiscal policy to be highly expansionary in the near-term, from 2022-24 (Figure 3, third row – negative numbers represent net support to the economy). Fiscal tightening only truly bites in 2025-26 before culminating in the almost £55 billion fiscal contraction much-discussed in the media. By frontloading public spending, the government has committed to stimulating a weak economy, spending £29.1 billion in energy and cost of living support in the next year alone. Yet considering the UK has had four Prime Ministers in four years and will vote again in 2024, it is unclear whether subsequent governments will adhere with the fiscal tightening dictated in the Autumn Statement.

A second issue is how one might measure fiscal prudence. Debt-to-GDP ratio can be measured in different ways, some of which eliminate the fiscal hole altogether. If one includes Bank of England net liabilities, which was the OBR’s practice until 2021, public sector net debt falls even without the Autumn Statement’s fiscal consolidation (Figure 2, in blue). So could a slight upward revision of GDP growth rates. The fiscal rules to which the government is committed are also not themselves set in stone – there have been nine sets of fiscal rules since 1997. One could imagine modifying or even abolishing Hunt’s fiscal rule of committing to reducing the debt-to-GDP ratio in five years, with the view that it is too strict. In November, Hunt himself loosened an older fiscal rule committing to reducing the debt-to-GDP ratio in three years.

The fiscal hole is an attempt to place a number on a real budget gap. But a number belies the somewhat arbitrary assumptions and objectives set by the government of the day, itself based on an uncertain five-year projection. Moreover, the lack of any fiscal tightening planned in the next two years makes one wonder if we should take the government’s longer-term plans seriously, or if it is simply a soundbite that will be forgotten after the next election.

This week's thought was by Jonathan Loke

Jonathan Loke is a second-year Economics undergraduate at the University of Cambridge and Research Director at the Marshall Society.